Shade Oshoba releases the Visuals of “Ninu Irin Ajo Mi” (As I journey through the Land), a Yoruba hymns written and composed by R.H. Cornelius in 1916.

The Apala gospel diva and “Product of Grace” Crooner whose passion has always geared towards restoration of hope, healings to the broken hearted and deliverance through soul lifting songs has once again challenged the Christian community to restore the spiritual relevance of Hymns.

She has worked with other private films producers on several film projects and recently stared along Dstv Ambassador, Eliel Otote in a soon to be released film “So long a Night”. Shade Oshoba is currently the presenter of “African Gospel Mix” on RTM, a South African gospel satellite television of the Redeemed Christian Church of God located in Randburg, South Africa and “Hymns in Worship” which is expected to hit the air waves of television stations in Nigeria soon.

She is married to Paul Oshoba, a television producer, film director, social media consultant and a Pastor in the Redeemed Christian Church of God. They are blessed with children. 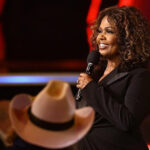