The monumental project generated over 8 million streams and over 100K in albums sold within its first week.

The nominations were announced today and the 2020 Billboard Music Awards will air on NBC live from the MGM Grand Garden Arena in Las Vegas on Wednesday, October 14th at 8 p.m. ET/PT.

Hillsong UNITED is undisputedly one of the genre’s most influential artists in the history of contemporary Christian music with more than 4.7 million global album sales and over 3.1 billion worldwide career streams.

The group also remains the No. 1 Christian artist on all social media platforms with over 10.8 million fans combined. 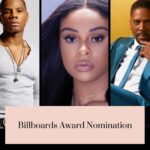